Close
Follow us on social media
#HOSTELCO2022
Back to press release

Hostelco and CEHAT join forces to strengthen the hotel industry 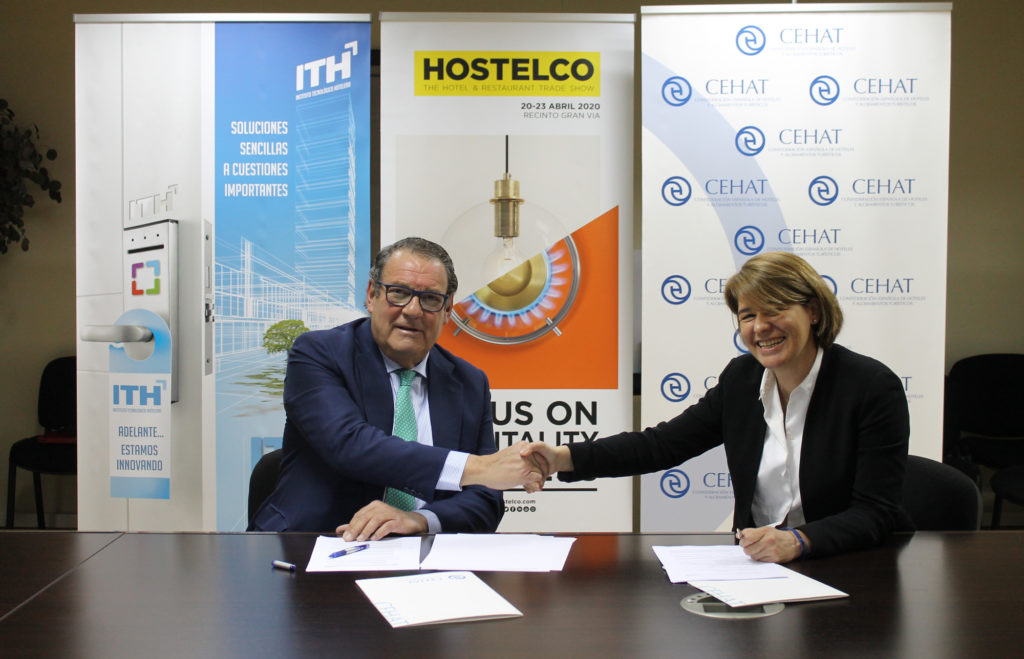 Hostelco and the Spanish Confederation of Hotels and Tourist Accommodation and the Hotel Technological Institute CEHAT-ITH have signed an agreement with the aim of promoting the dissemination of knowledge, networking, boosting business and giving greater impetus and visibility to the tourist accommodation industry. The collaboration between both organisations will also take the form of the creation and coordination of the spaces Hostelco Live Hotel and Hostelco Live Arena, focusing on the transformation of the hotel industry generated by new consumer habits, the latest generation technologies and the concept of hospitality.

By virtue of the agreement, Hostelco and CEHAT will create synergies to strengthen the hotel industry, showing the most comprehensive and transversal offer of this industry, from the equipment and products of design and interior design to the new control and management systems. The objective is to promote knowledge and debate on the key issues affecting the industry, in addition to boosting business, by providing operators and professionals in the world of tourist accommodation with a networking centre that also represents all aspects of their ecosystem, and that offers them multiple services such as attending conferences and presentations to learn about the latest industry trends, or participating in tailor-made activities that inspire and are applicable to their businesses.

In this context, it should be noted that digitalisation, big data, artificial intelligence, connectivity and Internet of Things (IOT) are revolutionising the hotel offer to adapt to the new needs of ‘hyper-connected’ customers, and travellers looking for establishments that ensure excellent service and functional and sustainable infrastructure. Both organisations will collaborate with the aim of promoting the dissemination of content and solutions that are transforming the hotel industry, and the new concept of hospitality that encompasses the value of ‘well-being’ in all its aspects.

“Hostelco is not only the leading trade fair in Spain and a European benchmark in its speciality, it is also the main platform for presenting the latest trends and innovation in the industry. In this sense” says Mar Santarrufina, Director of the fair “the hotel industry is one of the segments that is undergoing the greatest transformation. For this reason, we have decided to strengthen this area and we could only do so with the best of partners that, without a doubt, is CEHAT, the Confederation that brings together all the segments of this market at a national level. Together, we will add resources to create the most complete scenario of developments and trends in the hotel industry and a first class business centre. In addition” adds Santarrufina “we will promote the high level of the Spanish offer and the advances that have been achieved thanks to the industry’s investment in R+D+i , that have contributed to consolidate its current competitiveness and project a more technological and sustainable future, satisfying increasingly demanding needs ,, and anticipating its unstoppable evolution“, she states.

For his part, the president of CEHAT, Juan Molas, assures that “For CEHAT and ITH it is very important and significant to be able to participate in Hostelco, the main fair dedicated to the equipment of the hotel trade through the spaces “Hostelco Live Hotel” and “Hostelco Live Arena” realising and organising an elaborated programme of presentations and round tables centred on the new technologies applicable to the tourist hotel industry”.

Thus, CEHAT and ITH will participate in the construction of the “Hostelco Live Hotel” space that will host the recreation of several rooms of a hotel designed by renowned architectural and design studios, and equipped with the latest innovations in interior design and state-of-the-art ‘contract’ and technological devices.

CEHAT will also participate in the coordination of the Hostelco Live Arena, where presentations, talks and presentations by professionals and experts specialising in various areas of hospitality will take place.

An industry which is growing at a rapid pace

According to the latest data available from the National Statistics Institute (INE), tourism accounts for 11.7% of Spain’s GDP, and also has a notable ‘dragging’ effect on other economic industries. It is undoubtedly one of the country’s main sources of wealth, and accommodation is one of the fundamental axes of this industry as it is a key element in attracting tourists. In this sense, Spain has a large supply of nearly 930,000 hotel rooms, and demand, for its part, shows sustained growth: international tourists increased by 3% in 2018, reaching 85 million. According to forecasts, in 2023 this figure will reach 96 million which will lead to 16.3 billion euros in hotel sales, 4.4% more than 2018 (Source: SiteMinder).

On the other hand, according to the latest report by the real estate services company Colliers International, published in March this year, Spain is the second European power, after the United Kingdom, in attracting foreign capital for hotel investments: in 2018 it achieved a historical record , considering both existing hotels and real estate and land to develop new projects, which amounted to a total of 4.8 billion euros. This is a new record and is 23% higher than in 2017, when international investments reached 3.9 billion euros.

The Spanish Confederation of Hotels and Tourist Accommodation, CEHAT, represents the entire Spanish accommodation industry: hotels, tourist apartments, campsites & resorts and spas. It represents more than 15,000 establishments and 1,800,000 places grouped into 51 national, provincial, regional and local associations throughout the country. Furthermore, the Hotel Technological Institute is the hotel industry’s response to the challenges posed by technological advances for entrepreneurs in the tourism industry. For fourteen years, this innovation centre, linked to CEHAT, has had a mission to promote the use of new technologies and management systems that contribute to improving the competitiveness, profitability, quality, efficiency and sustainability of companies linked to the hotel and tourism industry.

From 20th to 23rd April, Hostelco, organised by Fira de Barcelona and The Spanish Federation of Associations of Equipment Manufacturers for the Hospitality and Related Industries (FELAC) – is preparing its next edition to be held from 20th to 23rd April 2020, in the Gran Via venue jointly with the Alimentaria fair. In this way, both fairs will once again be a large industry platform presenting the most complete range of solutions and equipment, machinery, furniture, interior design, technology, food and gastronomy. Hostelco 2020 will also be committed to a new distribution of the exhibition space and, within this framework, will create the space called “Atmosphere” which will host Hostelco Live Hotel, Hostelco Live Arena, and Hostelco Live Restaurant, where interior design and technology, key tools for creating unique spaces, capable of generating experiences and thus attracting and retaining customers in hotel establishments and other spaces of the Horeca channel.

Images of the signature are available here.