A kitchen for every chef: eight personalised projects

The new kitchens of some great chefs are claiming their rightful space in restaurants. Those closed bunkers of old, hidden from the sight of customers, have long gone; today these spaces are open to the dining area, occupying a privileged central position and inviting customers to watch and interact. Even out-of-sight kitchens are being updated with high-end equipment and streamlined aesthetics that beg to be seen. All of them, however, have one thing in common: the goal is operating efficiency and convenience, and their chefs have had a lot of input in their design.

What are chefs looking for when it comes to designing their dream kitchen? TV chef Pepe Rodríguez, who will shortly be reopening the kitchen at his restaurant El Bohío in Illescas (Toledo), explains it perfectly in this video: working even better, substantially improving the finish of dishes, being able to do everything instantly thanks to the equipment on hand; having an oven and a hob at each station… yet not getting too hot: 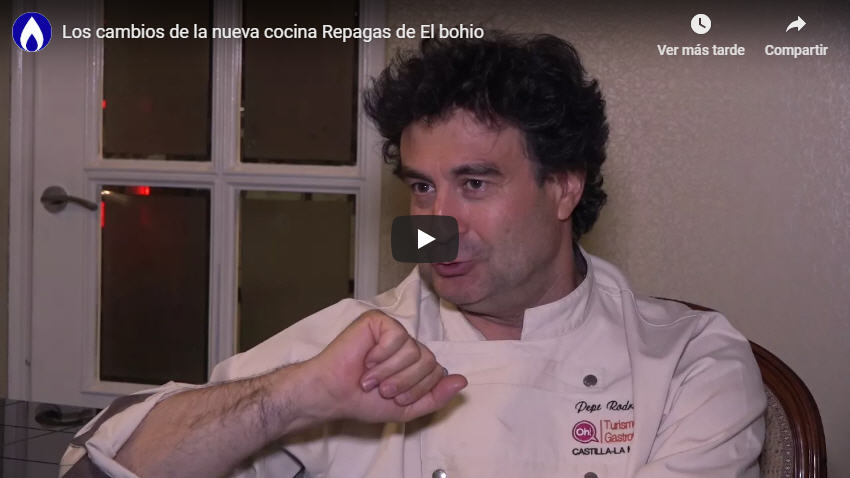 The firm Repagás was charged with creating the new kitchen at El Bohío, completely in line with Pepe’s requirements and equipped with every last detail according to his needs. This is an island-based kitchen that is completely customised in terms of colour and style; a complete 360º ‘Repagás Concept’ project that includes a combi-oven for the pastry chef’s section. The added extra? The room temperature of the kitchen, which is kept constant to ensure that everyone works in the utmost comfort. Here is the layout:

The open kitchen at Noor, by Paco Morales

Chef Paco Morales decided to go back to his native city Cordoba about a year ago to open the doors to his most personal project: Noor. The 400 square metre restaurant boasts a magnificent open kitchen that has been totally equipped to meet his needs by Fagor Industrial. Morales worked as a sous-chef in Mugaritz, the restaurant of Andoni Luis Aduriz, whose kitchen was also equipped by this same Guipuzcoa-based firm.

To be specific, it has been designed as two bespoke central islands with a cold preparation space from Fagor’s Concept Plus range. In addition, the central module features cooking and griddling equipment from the 900 Range. The Advance Plus ovens and a blast chiller round off a state-of-the-art kitchen in which eight people can work at any one time. In the storage area two dishwashers from the Concept range have been installed to deal with all of the restaurant’s tableware between services. Here are some photos taken by the restaurant:

A preeminent kitchen designed by and for Noor where the Andalusian cuisine of Paco Morales reigns supreme, not to mention an interesting cultural project and a creative R&D space.

The new kitchen at Coque in the centre of the restaurant

The restaurant run by the third generation of the Sandoval family (Rafael, Diego and Mario) has just moved to the Spanish capital. In its almost 1,100 square metres of space over two floors, the stunning 300 square metre kitchen stands out, located in the very centre of the premises and perfectly integrated in the restaurant.

The project, designed, realised and executed by Kitchen Consult with every detail considered down to the last millimetre, starts with the hot kitchen and the pass, which consists of five modules: two for cooking and three cool ones, as well as the pass tables. The office is hidden and immediately afterwards is the R&D zone and cold preparation area, which boasts spacious working areas with chiller cabinets. There is also another preparation area at the basement level.

Chef Mario Sandoval was involved in the project from the outset: he wanted the kitchen to be highly practical and convenient, and made one special request: that all the units should be one metre high.

The result is a very spacious kitchen in which more than 40 people can work at any one time without getting in each other’s way. Designed to be seen, it is also highly modern, with worktops and walls clad in state-of-the-art materials manufactured sustainably. On the ceiling, wood is used to give the space a singular visual element.

Another particularly interesting kitchen project is that of Gresca restaurant at Calle Provença 230 in Barcelona, which will be celebrating its first anniversary shortly. The space covers just 50 square metres, including the kitchen, washing area and cold preparation zone, reflecting the Barcelona restaurant’s commitment to the open kitchen concept, integrated into the dining area, with no barriers between the customers and the chef. It was designed, manufactured and executed by Proinsfred Engineering Group.

The star element is the Proinsfred Kitchen Evolution cooking range which was tailor-made to the requirements of chef Rafa Peña and includes high-end cooking equipment from Bonnet. Particular care was taken to ensure ease of cleaning: all the equipment has a water tank and drain, combining design, aesthetics and functionality in a single element.

Another essential item in an open kitchen like this is the extraction fan, which was made to order with a perimeter air intake that prevents smoke and smells from reaching the customers. It is controlled by a TFT screen that monitors air input and output as well as the energy consumption, operation, cleaning and maintenance of the equipment.

The new kitchens at the Ritz Carlton Abama

The new kitchen in the beach restaurant of the Hotel Ritz Carlton Abama in Tenerife was opened this year.

This modular kitchen, planned and executed by Texelman covers an area of 200 square metres and is designed for a team of 25 people. The kitchen is an open one with a spectacular central block featuring a single 3 mm thick worktop which stands out for its strength, flexibility and finish. ‘We worked in tandem with our installer Complet Hotel and in very close collaboration with the chefs to fulfil their demands effectively,’ says the company. One special request was the black finish, which looks extremely elegant in contrast with the stainless steel of the equipment:

the kitchen’s spectacular central block is by Charvet, complemented by Vianen extractor fans and Rational combi ovens. The central cooking range mainly uses gas with some electrical components such as fat fryers, salamander and bain marie.

An absolute classic of the Spanish gastronomic scene, Zalacaín was the first Spanish restaurant to win three Michelin stars, and has just opened its brand new kitchen which replaces the one that had been there since the restaurant opened 42 years ago, designed by Flores Valles.

The same firm has been responsible for the impeccable integral renovation of the kitchen, which took just 75 days and has not significantly changed the original layout. Designed for up to 20 people to work in comfort, in addition to the cooking area (56 sq. m), it also has cold chambers (18 sq. m) a plunge zone (7.5 sq. m), the pastry chef’s area (20 sq. m) and a cold storage unit (6 sq. m).

The most significant thing about the new kitchen is the central range which has been tailored specifically to meet the demands of the chefs and Carmelo Pérez, the Head Waiter. Almost all the equipment is gas-fired and made by Flores Valles, apart from the convection ovens which are by Rational.

‘What we were aiming for was to update the existing equipment while adhering to the restaurant’s traditional character, which is one of the hallmarks of Zalacaín, but without ruling out cutting-edge equipment,’ says Patxi de Juan, the head of Industrial Kitchen Sales at Flores Valles. A solid kitchen that is a worthy foil for the dishes of Julio Miralles, the current chef at Zalacaín, and his team.

A high-end kitchen for Ramón Freixa in Panama

There are certainly no complaints from chef Ramón Freixa about his new kitchen in the Hotel Las Américas in Panama, housed within the stunning Golden Tower. In actual fact there are two kitchens, on floors 28 and 29, which are used for events; each one covers an area of around 300 square metres and provides enough space for 10 to 15 people to work at any one time.

The kitchen on floor 28 is an internal facility equipped with modular units that form a perfectly assembled whole. On floor 29 the kitchen is an open one with spectacular equipment: it features a bespoke cooking range that includes induction hobs, a hard chrome grill and other elements that stand out in a space where all the work surfaces form a continuous plane and were welded in situ, without the slightest fissure that might trap dirt.

EThe project was developed jointly by the Santos Grupo and Joaquín Casademont, from design through to assembly, with the fine-tuning completed by the technical team of the Santos Group in Panama. The work was also coordinated by Ramón Freixa, who determined the exact specifications he needed: above all, the chef values functionality, ease of use, robustness and hygiene.

Most of the equipment is gas-fired although there are also state-of-the-art induction hobs. Also worth mentioning are the Wexiodisk washing systems with an energy recovery system and an automatic hood life, a new feature that is a first in Latin America.

The fairy-tale kitchen of Dani García

Among the ‘signature’ kitchens, we simply have to mention the one in Dani García’s restaurant in the Hotel Puente Romano in Marbella. With an area of 340 square metres, this open kitchen was designed by architect Juan Carlos Rodríguez. Dani García was very clear that his kitchen should be the shining light of the whole establishment, contrasting with the colours and features of the rest of the restaurant. Apart from the open kitchen concept, he has added another key feature: making the customer feel like the protagonist of a real fairy-tale. For this reason, fantasy and childlike décor imbue every corner of the restaurant.

The luminous, pristine, open-plan kitchen of Dani García’s restaurant is a blank canvas for the creativity of the Malaga-born chef, and an incredible visual experience for diners. The walls and worktops are clad in white Zenith laminate by Dekton (Cosentino) en contraste con suelo oscuro e industrial de Dekton en tono Keranium. in contrast to the dark industrial floor by Dekton in Keranium. The food safety and hygiene aspect of this material was a determining factor in its choice, as well as the feeling of space, cleanliness and purity it offers. Pilsa has been in charge of the whole kitchen project.