The challenges of a universally accessible hotel industry

The ONCE Foundation, which supports the “Design for All” concept related to the hotel industry, will take part in the forthcoming Hostelco at The HOSTELCO Experience – Live Hotel including talks and the construction of a model adapted room. The room, 32 m2 in size, attempts to demonstrate that the design, aesthetics and dimensions required to comfortably accommodate people with special needs is comparable with the interior decor of conventional accommodation. 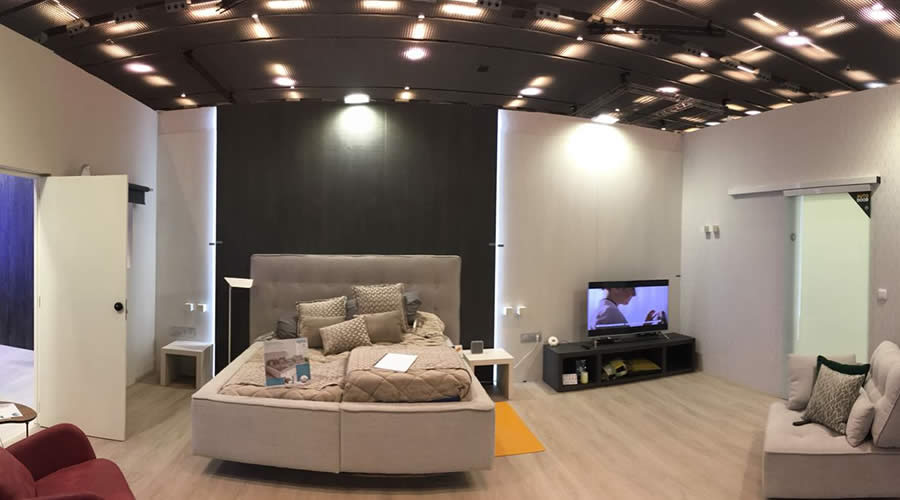 Image of the adapted room designed by the ONCE Foundation.

Technology teams up with the adapted room, as the ONCE Foundation model has smart location beacons called beepcons: a home automation system for opening doors and windows, lighting, a voice-controlled television, an articulated double bed, a luminous emergency warning and evacuation system which can be re-routed to the customer’s mobile devices and a map of the hotel in Braille. 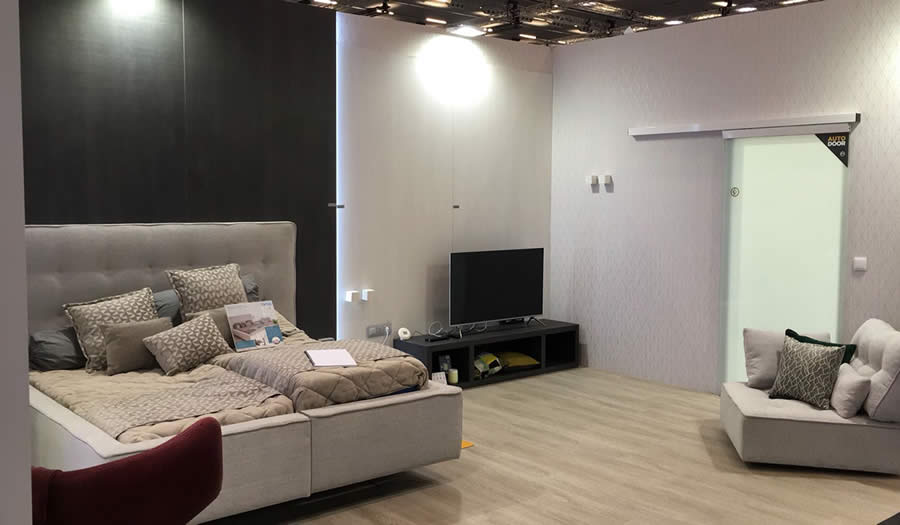 As for the bathroom, both the toilet and the washbasin are height-adjustable and the shower is fitted with a seat. In addition, customers can use an automatic full-body dryer, hygiene items labelled in Braille and other products necessary for facilitating autonomy and ensuring the safety of people with disabilities during their stay.

The niche group of tourists with special needs are travelling more and more and they have purchasing power which can be translated into economic profitability for the establishments which invest in meeting their needs. By means of the informe de la Fundació ONCE, la situació de l’accessibilitat universal in domestic hotels and the progress which still needs to be made. 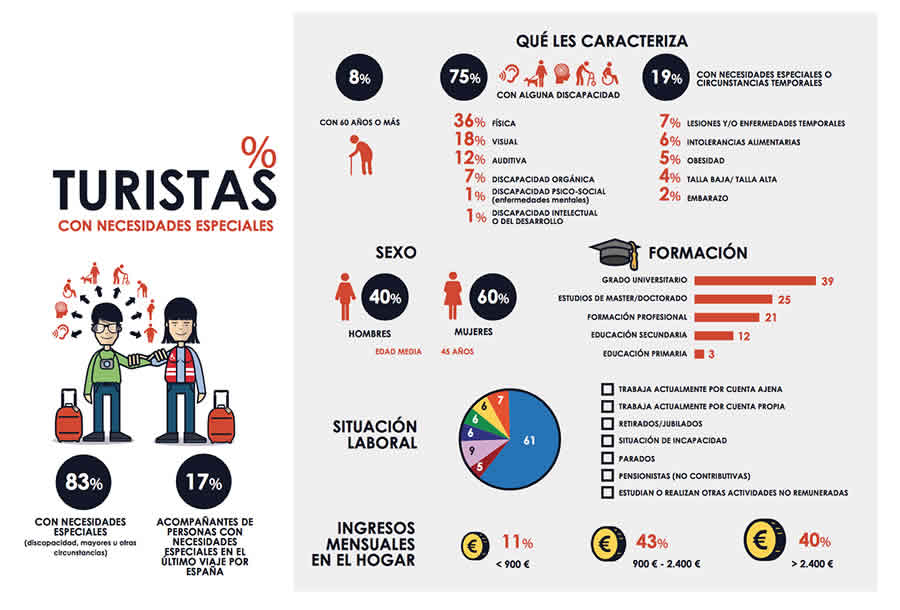 Characteristics of the sample forming part of the survey for the ONCE’s report on Universal Accessibility.

About 1,300 million people around the world suffer from some form of disability (15% of the total population). By 2050 there will be more than two billion people over 60 years old, making accessible tourism a need and a business opportunity boosted by the so-called “active ageing” process. The demands of senior tourists include amenities such as special menus and diets, hotel rooms with showers instead of bathtubs, nearby health services and adapted means of transport.

Regardless of the potential of this kind of customer, the current socio-political revolution, which seeks to popularize rights to transversal equality, supports one of the main breakthroughs in the development of an inclusive tourist sector, constituting a form of approximation involving a cultural exchange and an understanding between peoples, and its development must therefore be responsible and sustainable. 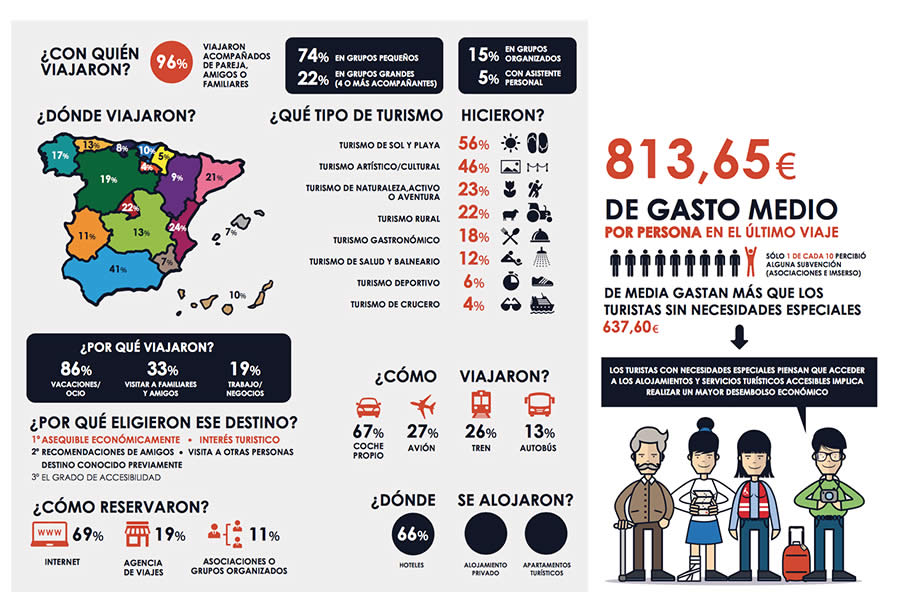 Summary of the needs and characteristics of travellers with special needs. 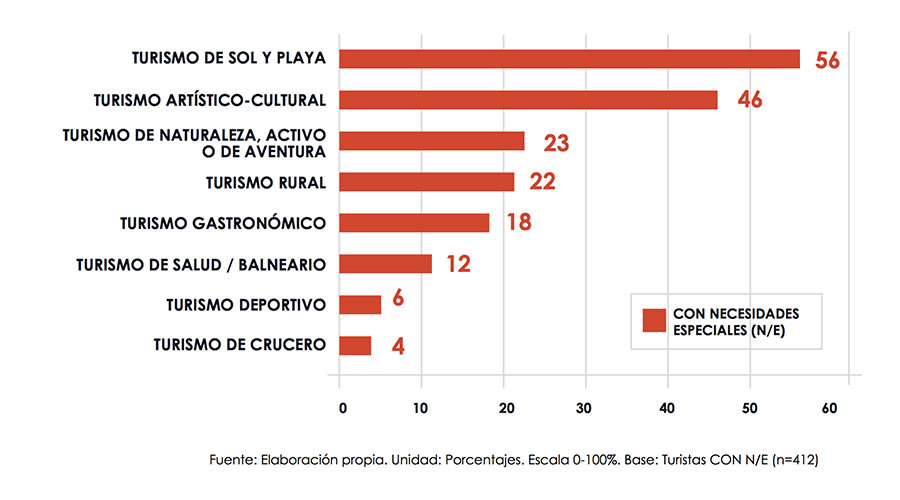 Typology of segment most visited by travellers with special needs.

The respondents categorize their last trips in Spain in the following segments: sunshine and beaches (56%), art and culture (46%), nature, activity and adventure (23%), the countryside (22%), gastronomy (18%), health and spas (12%), sports (6%) and cruises (4%). We should highlight tourists with hearing disabilities, who account for more sports tourism (17%) than the other profiles.

The hotel is still the preferred form of accommodation

Nearly 7 out of 10 respondents chose a hotel (66%), while the following option was to stay in private accommodation or with a friend or relative (24%). In third and fourth place came tourists who chose tourist apartments or private rental lodgings (17%) or rural accommodation (12%). In a more residual manner, they stayed at guest houses, boarding houses, campsites and hostels.

Although visually-impaired users regard hotels as better adapted than rural accommodation, they perceive these adaptations to be more focused on people with reduced mobility and come across problems, especially in restaurant buffets, where the menu boards are not always accessible.

The most frequent complaint among people with physical disabilities is that, although many establishments claim to provide adapted rooms, once they arrive, they find that they do not meet the necessary requirements. Users demand the need for the existence of accessibility standards in the same way as the star-based classification. This absence of standardization leads to uncertainty and greater time expenditure. 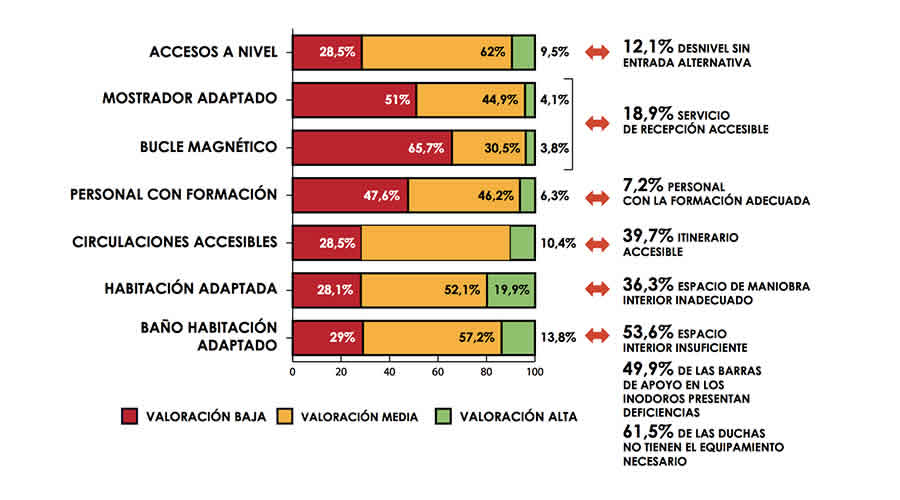 Areas and spaces with the highest number of complaints among the travellers with special needs interviewed.

The worst rated aspects are grouped together in the field of how the guest is attended to and received, in terms of the adaptation of the design of the reception desks (51%), the training of the staff (47.6%, including training related to service and communicational strategies) and the absence or incorrect use of the magnetic loop which should exist on the desk (65.7%).

Even in adapted rooms, it is possible to find defects like the thermostat or the shower head being at an unsuitable height, indicating slackness when it comes to addressing accessibility in a holistic manner. Finding adapted lodgings entails a greater cost for the user, as they are usually classified as four or five-star hotels.

Entertainment is one of the areas generating the greatest dissatisfaction, due to its lack of adaptation to realities other than disabilities linked to reduced mobility, such as cognitive and visual impairments.

Generally speaking, when it comes to organizing trips, people with hearing disabilities use the Internet, but they encounter problems in accessing information and communicating, with barriers such as lack of signage, text and subtitles.

The main obstacle tourists with physical disabilities point to is the difficulty in finding reliable information on accessible accommodation on the internet.

As for tourists with intellectual disabilities, they point out that websites create serious accessibility obstacles due to the lack of information in easy-reading mode or by means of pictograms.

The lack of workforce training in the specific needs of people with hearing disabilities makes communication difficult. The technical analysis reflects that only 7.2% of hotels have trained personnel.

3 out of 10 (32%) hoteliers declare that the staff who serve the public at their establishments undergo specific training in serving customers with disabilities and special needs, compared to 60% who declare the opposite, while 10% do not know whether their staff have the specific training. In addition, in the same proportion as above, 3 out of 10 providers (31%) claim to have emergency plans which expressly envisage adaptations in eventualities involving the evacuation of customers with disabilities. In this regard, we should also highlight that 23% are unaware of the above.

Are hotel entrepreneurs aware of the legislation?

Almost 8 out of 10 companies and tourism providers (77%) declare that they are aware of the legislation on accessibility applicable to their business or establishment, set against 23% who say they are not aware of it.

In addition, 56% confirm that their establishment or service has incorporated a specific policy, commitment or procedure with regard to persons with disabilities. Of the above, more than half claim to have established an accessibility plan (53%). Moreover, 11% say that they have incorporated a person responsible for universal accessibility at the establishment, while 10% say they have recruited people with disabilities.

At hotels the slope at the entrance represents the greatest problem, due to the non-existence of an alternative entrance at 12.1% of the hotels.

Other weak points are the entrance doors, which are not suitable at 36.8% of the hotels. Thus, 4.9% of entrance doors cannot be used by all customers or pose risks for their safety, while 31.9% require improvements to achieve suitable accessibility levels (in their signage, the spaces of manoeuvre available, the design of the handles, etc.).

With regard to the route from the hotel entrance to the room, 39.7% of the hotels point to the fact that they have an accessible path, while 3.25% of the hotels have significant accessibility shortcomings along the route. 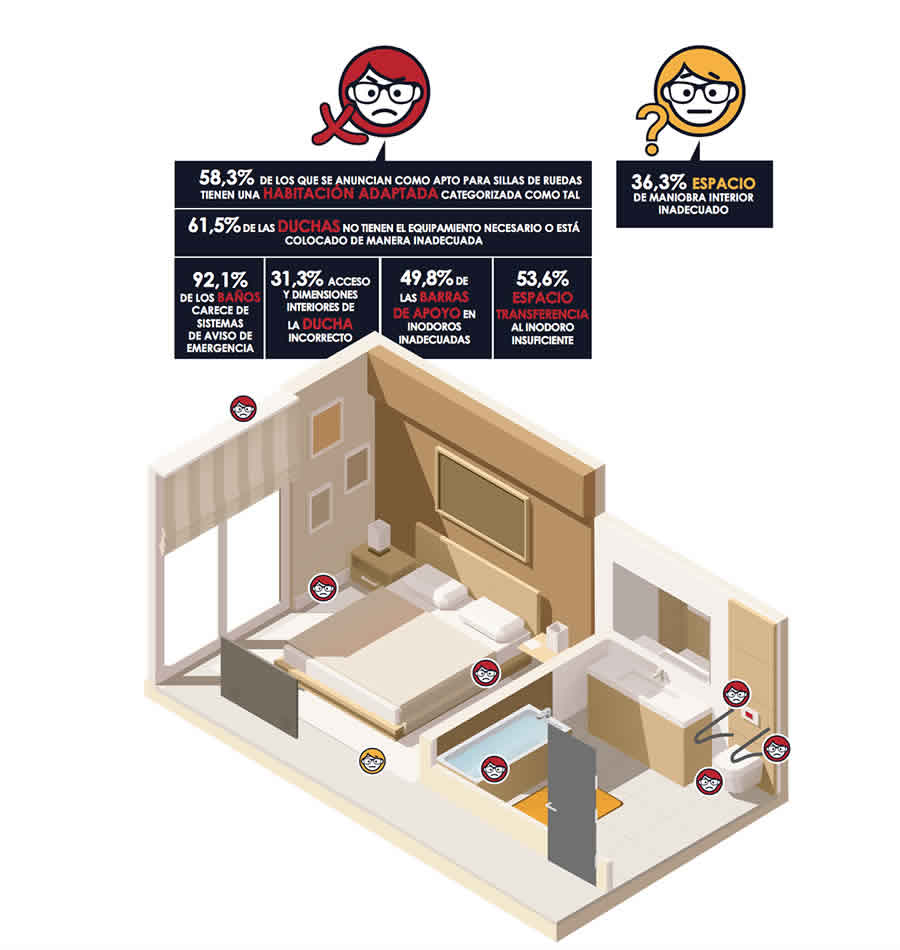 Model of room with difficulties for visitors with special needs.

In the hotels under analysis, 58.3% of those advertised as suitable for wheelchairs have an adapted room categorized as such. The others simply allocate a standard room or one larger than usual to accommodate customers with disabilities. This lack of attention to detail once again shows that accessibility for wheelchair users is not understood in a global manner.

The problems of space, manoeuvre and access to the furniture of the rooms are the ones most frequently mentioned, as well as the emergency warnings and systems, which are non-existent in more than 90% of the bathrooms.